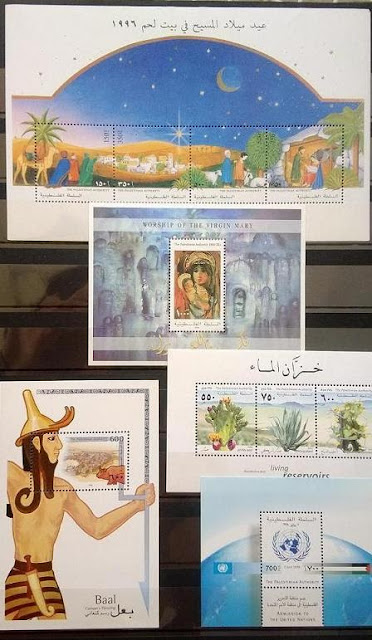 This week I break from the habit and post the stamps alone - I am fairly new to collecting covers but I've been collecting stamps ever since I was a kid and have a reasonable collection in about a dozen albums :)
When I read that mini-sheets will be this week's topic on Sunday Stamps, I remembered my favourites and took a photo with my mobile (as I don't have a scanner at home, I hope you will forgive the irregularity!): I visited Bethlehem almost four years ago, the Post Office was nearby and I went a little beserk heh, I found so many beautiful stamps and the man working there was superfriendly! It must be one of my favourite 'postal moments' :))
Some stamps I've sent on postcards, this lot found its place in an album. The first mini-sheet was issued for xmas 1996 and shows the Nativity Scene. The second one,  Worship Of The Virgin Mary, is from 2004. The cacti under title Living Reservoirs are from 2003, and the sheets from 1998 show a representation of a Semitic Lord called Baal, and the last one of the admission of Palestine Authority to UN.
You can see some fantastic mini-sheets on various blogs via the link below ;)