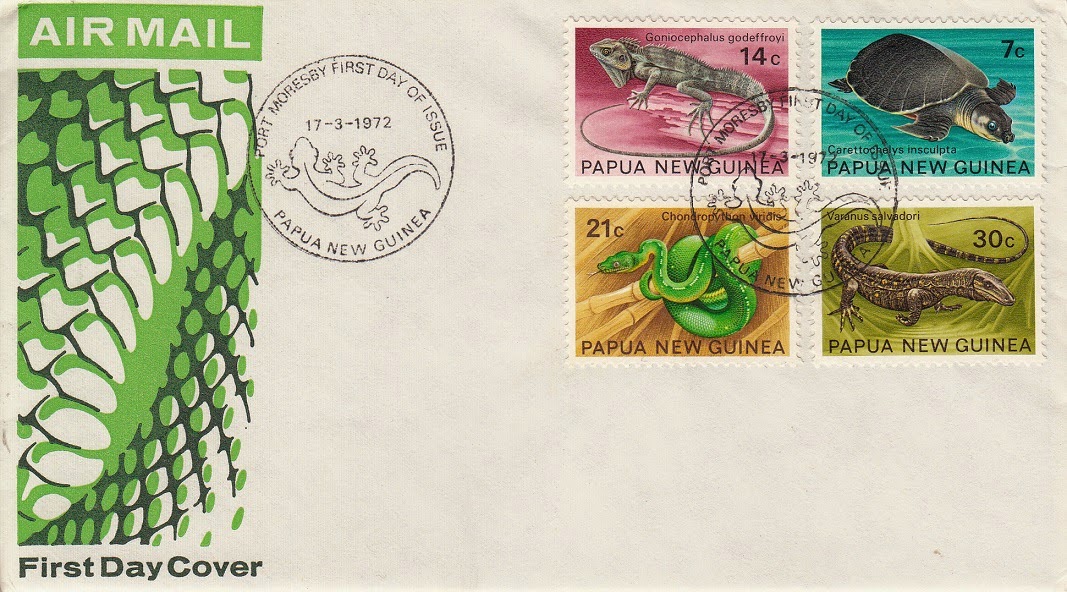 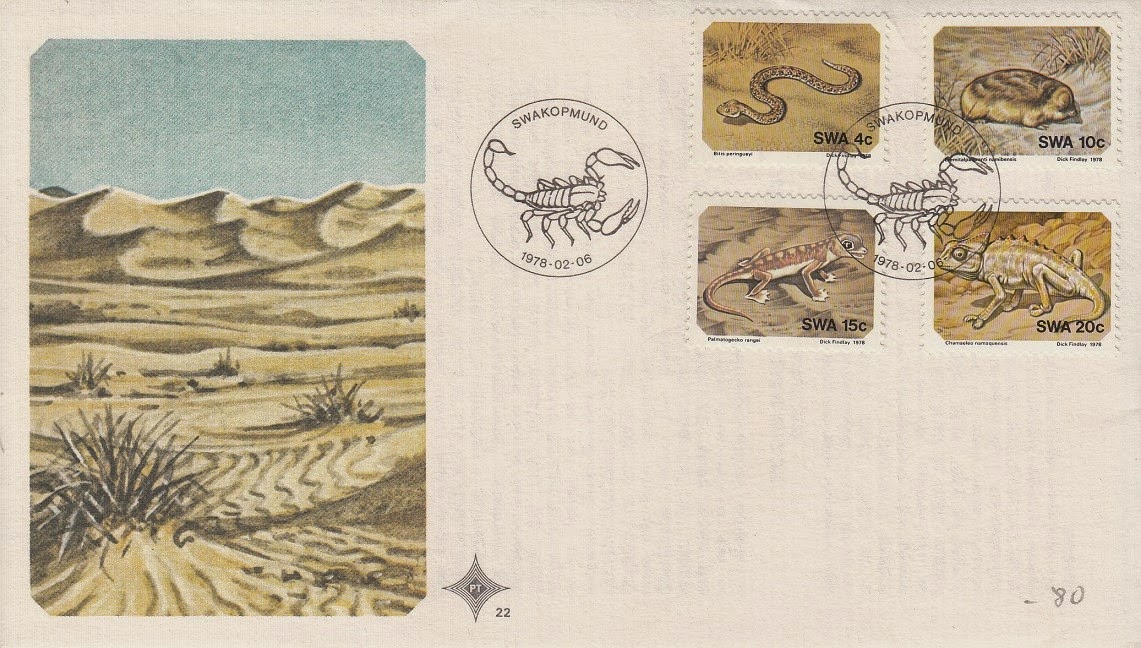 For Sunday Stamps #185 one of 'my' themes! Decided to post two covers at the same time, both countries were featured previously but to post about reptiles is a special treat for me. Not really sure how and when my love for reptiles began, i just find them...fascinating. And cool heh.
So I acquired these FDCs for my collection last year - one as colourful as the rainforest of New Guinea and the other as monochrome as the Namibian desert. I'll make a bit of a longer post that you are of course not obliged to read, but I am interested in all of these species and I love learning about them as I do research for the blog!
Papua New Guinea
1.Anglehead (Gonocephalus godeffroyi)  - first one and proves to be a tough one...not much to learn, the species not even listed on wikipedia under Gonochepalus genus...I like mysteries but this is too much..!
2.Pig-nosed turtle (Carettochelys insculpta), also known as the pitted-shelled turtle or Fly River turtle, is native to northern Australia and southern New Guinea - its freshwater streams, lagoons and rivers. Little is known about general behaviour, as there have been few studies in the wild. Their known extreme aggression in captivity suggests the species is markedly more territorial than most other turtles and tortoises. They are still available through the exotic pet trade and rate as vulnerable.
3.Green tree python (Morelia viridis) is found in New Guinea, islands in Indonesia, and Cape York Peninsula in Australia. Especially large specimens up to 2,200 g (4.9 lb) are females, which like most snakes are slightly larger and heavier than males. Primarily arboreal, these snakes have a particular way of resting in the branches of trees; they loop a coil or two over the branches in a saddle position and place their head in the middle. The caging for these animals is a bit more specific than the average python, but as long as these requirements are met, the animal becomes very low maintenance. (to be honest i pictured having this one at home...I wonder how much the snakes suffer in captivity? Of course feeding it would be a problem for me...)
4.Salvadori's monitor lizard (Varanus salvadorii) is found in New Guinea only, and is believed to be one of the longest lizards in the world, verified at up to 244 cm (8.01 ft), and in rare cases it may rival or exceed the length of the world's largest lizard, the Komodo dragon. V. salvadorii is threatened by deforestation and poaching, and is protected by the CITES agreement. The lizard is hunted and skinned alive by tribesmen to make drums, who describe the monitor as an evil spirit that "climbs trees, walks upright, breathes fire, and kills men"; yet the tribesmen maintain that the monitor gives warnings if there are crocodiles nearby.
This post is getting too long! Let me just name the creatures on the 2nd FDC: venomous viper Peringuey's desert adder, Web-footed gecko (they don't possess eyelids so they must lick their eyeballs clean in order to keep them moist!) and Namaqua chameleon (they use their ability to change colour to aid in controlling temperature - becoming black in the cooler morning to absorb heat more efficiently, then a lighter grey color to reflect light during the heat of the day). Now we have a furry impostor to the top right: a golden sand mole. Cute!
P H E W!
I hope there are many more reptiles here: