The Night Sky Over The Gilbert Islands 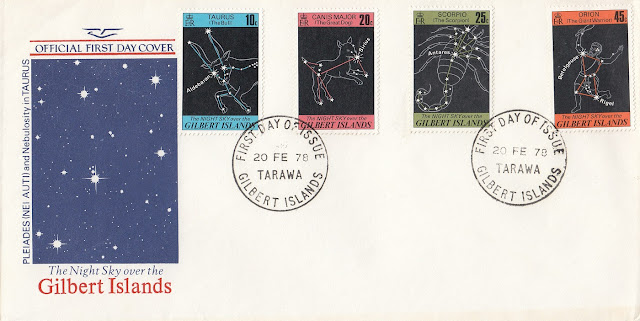 Night sky and constellations is one of my favourite topics (collection-wise and in general) which makes me happy to present this cover for this week's Sunday Stamps - letter 'N'. First of all, something I didn't know before attaining this cover: Gilbert Islands form the main part of Kiribati.

The constellations on these stamps are some of the most recognisable in the Night Sky - the V-shape of the Taurus' head, the brightest star Sirius being part of Canis Major, Scorpio's Antares with the mystical reddish glow, and of course the Orion's belt. I live in a relatively 'unspoilt' area and the stars are bright and plenty on a clear night. Anyone else enjoys exploring the constellations? :)