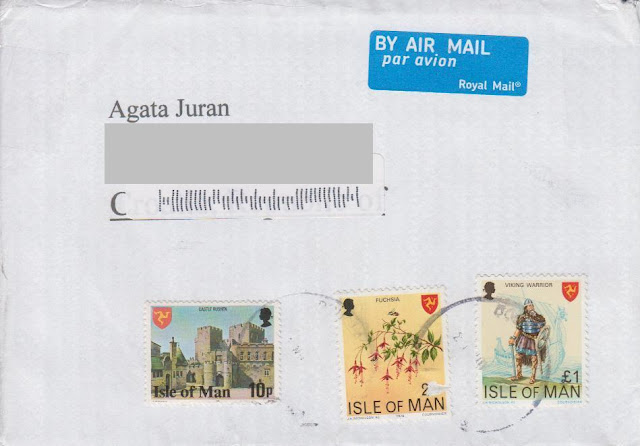 These three stamps were issued in 1978. I have actually bought some IOM stamps on ebay and received them in this envelope, nice :))

Email ThisBlogThis!Share to TwitterShare to FacebookShare to Pinterest
Labels: isle of man 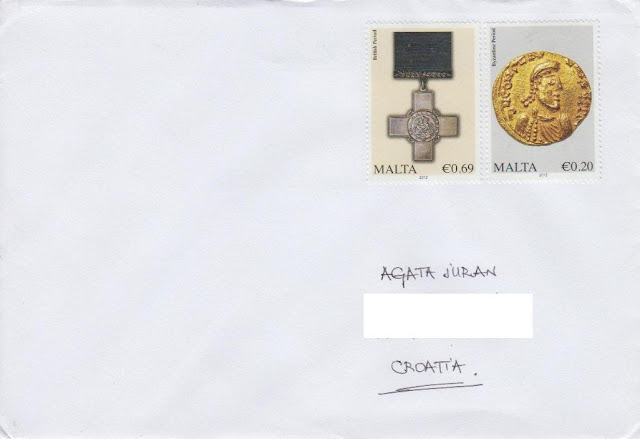 'MaltaPost' issued a set of two stamps (in 2012) which add to the Definitive set that was originally issued on 29 December 2009. The set of two stamps depicts the Gold Coin (Byzantine Period) and the George Cross (British Period)'. Malta Post has its own web-site now :) I have sent this set during my visit earlier this year - alas the cancellation is on the reverse side..!

Email ThisBlogThis!Share to TwitterShare to FacebookShare to Pinterest
Labels: malta 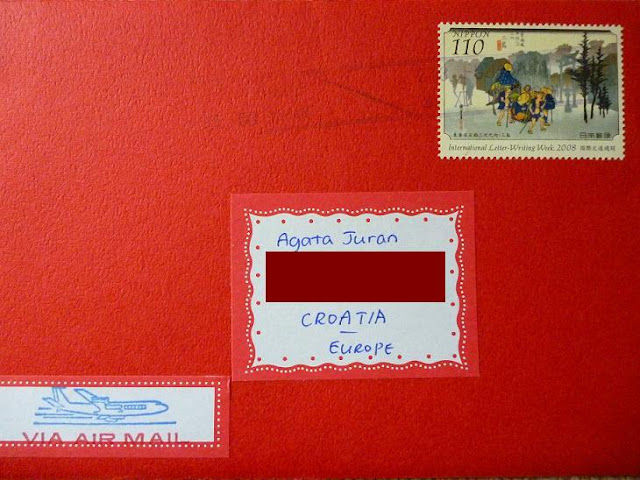 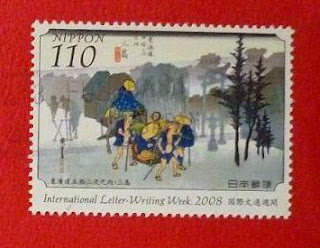 Wow I was so close to not participating in today's task...I couldnt find anything on the theme hobbies, until I opened my old letters-box. And oh what a splendid coincidence - I've found a beautiful stamp celebrating the International Letter-Writing Week in Japan.
''International Letter-Writing Week was initiated in 1957 at the 14th Congress of Universal Postal Union (UPU), with the aim of contributing to the world peace by promoting cultural exchange through correspondence among people around the world. It was decided to observe this event during the week that includes October 9, the date of the UPU's establishment. International Letter-Writing Week was set in Japan for the week of October 6 to 12. MPT has been issuing stamps annually to commemorate this event since 1958.'' (Source: www.onlineworkshop.net)
The stamps usually show Japanese traditional paintings - in 2008 they depicted three of "Fifty-three stations of the Tokaido Road " by Utagawa Hirohsige (1797-1858), ukiyoe artist in the late Edo era.

I am a huge ukiyo-e fan, as of Japanese culture, so I am really happy to have found this! The picture itself doesnt show a hobby but celebrates one of the greatest hobbies there are. I used to be very active in writing letters as a kid, these days postcards take up most of my time xD
You can check the different takes on today's Viridian's Sunday Stamps challenging theme yourself ;)

A Patchwork From The USA 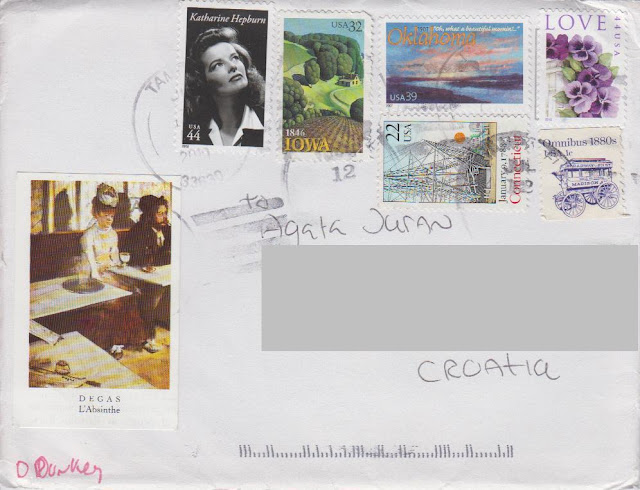 I love stamp sets on the covers, OR such lovely mix of everything like this one from dear Lori - thanks :))) 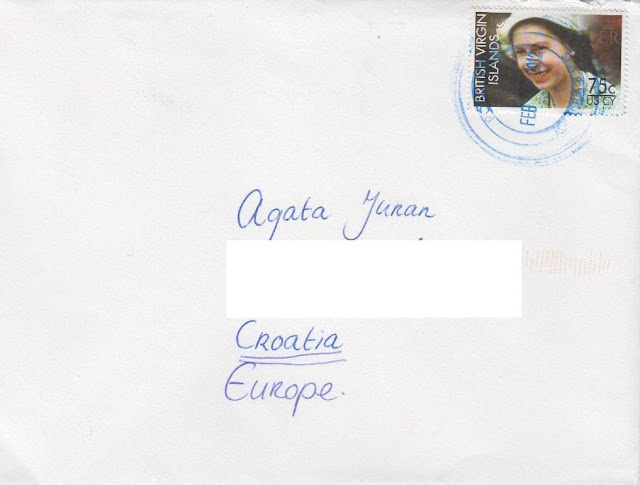 I have received this cover by 'accident'; a friend asked a friend to send me a postcard, but they understood a folded card...so here we are :) 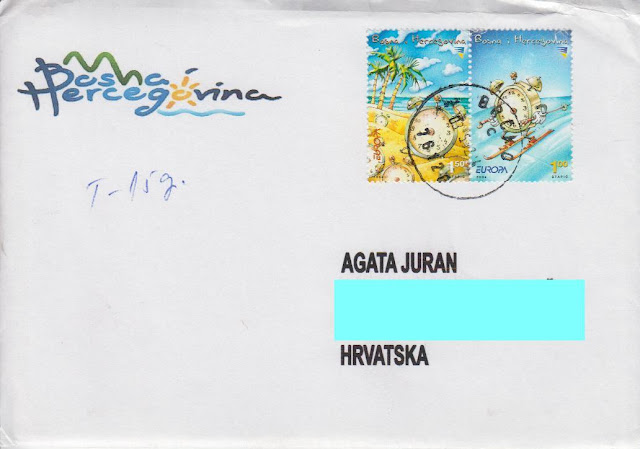 The theme for 2004 Europa issues was 'Vacation'. I love the name of the country written in the corner of the envelope :) Hvala Goge!

Email ThisBlogThis!Share to TwitterShare to FacebookShare to Pinterest
Labels: bosnia and herzegovina, EUROPA 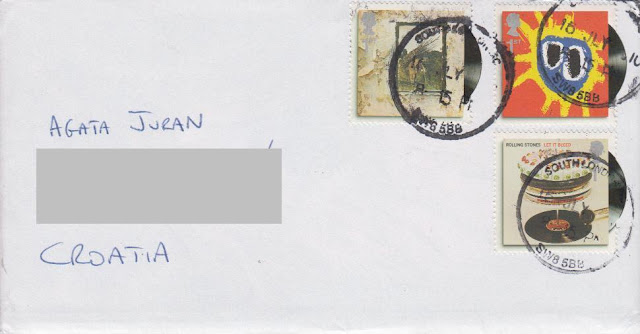 I was living in England when these came out - a set of 10 classic album covers, issued in January 2010. I was snooping around every local post office for them, in the end I had to go quite far and found one set, the rest was sold out! Some stamps were used on postcards, these three with the South London postmark present the albums: IV by Led Zeppelin ('71), Screamadelica by Primal Scream ('91) and Let It Bleed by The Rolling Stones ('69). 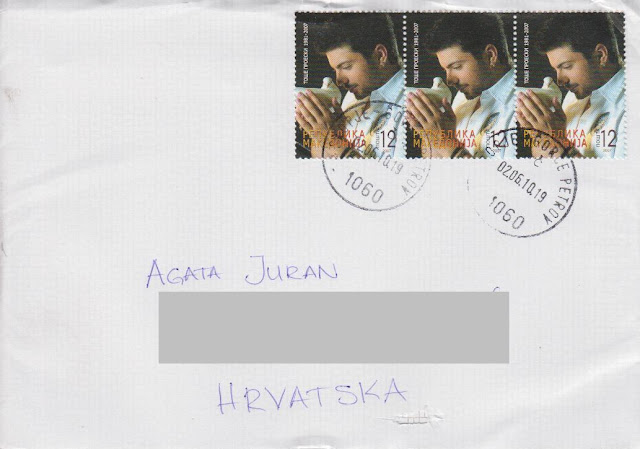 Last week was the sad 5th anniversary of the tragic demise of one of the most promising artists on the Balkans in the last decade - Todor Toše Proeski was a Macedonian singer, songwriter and actor who was popular across the entire Balkan area, not only because of his talent but also for his humanitarian work. His life was ended abruptly at the age of 26 in a car crash on the road to Zagreb. We all fondly remember him...
Hvala Ana, markice su stvarno prekrasne i kakve zasluzuje.. :)

Here is a song from his last album, in which he sings 'Because my life is a game with no boundaries, a tired story, tearing of the empty pages...' 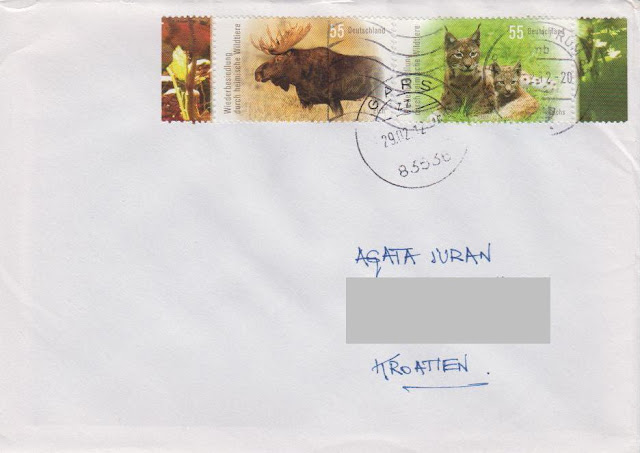 This set was issued while I was in Germany, and it inspired me for an animal group in my fav RR :) It is issued in relation to re-introducing wild animal species native to Germany, such as Elk and Lynx. In retrospective, what I am especially happy about is the cancellation with the name of the place it was sent from! Usually these only say 'Briefzentrum'. I have one out of tens of postcards with the name too. 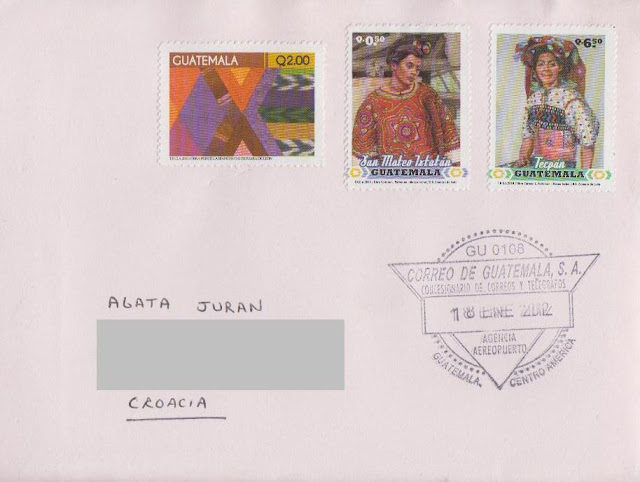 Inspired by my postcrossing friend Ana I've decided to participate in this week's edition of Sunday Stamps on Veridian's Postcard Blog  xD The theme is folklore, and I have been looking eagerly through my rather small collection of covers, only to find this great item from Guatemala sent to me by Pat for the NCC RR!
All issued in 2010; the 1st stamp is from a set of 10 showing Textile Art of Guatemala. Other two stamps are from a set of 4 showing typical costumes of Guatemala, a continuation of a set issued in 2007. First is a costume of  San Mateo Ixtatán (West Guatemala, Cuchumatanes mountain range), the second of Tecpán (South-Central Guatemala, on the Inter-American Highway). Gorgeous and unique cancellation! Thanks again Pat :)) 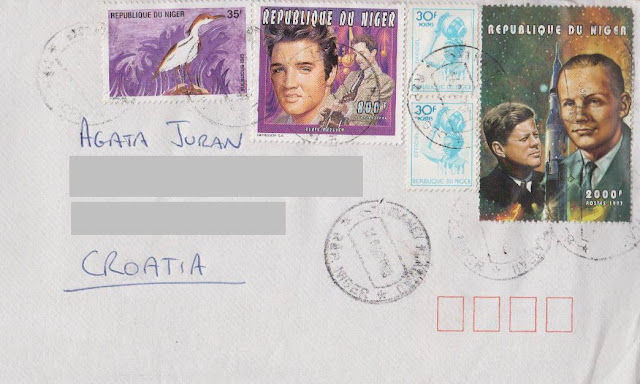 A wonderful mix of stamps on this cover! One celebrating the space discoveries, picturing Kennedy and Armstrong. Elvis is quite popular as I've seen more than one edition of Niger stamps with his image :) Very generous with cancellations too. Very very happy with this cover! 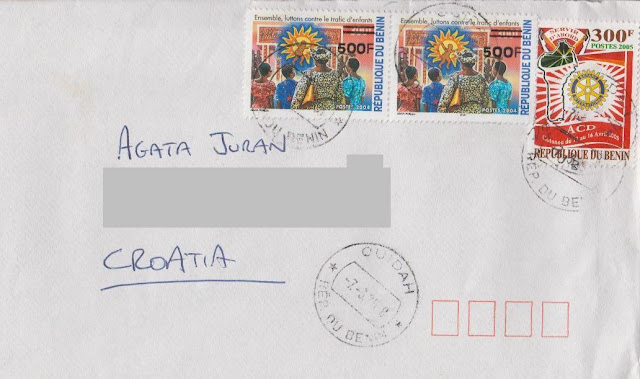 I am happy to have a friend who has travelled extensively and to some exotic destinations too :) At the time I was more interested in stamps themselves than covers, and oh blimey i cut them off the envelopes :/ However I have a few 'survivors', among them this cover from Benin. Colourful stamps from years 2004 and 2005. Good cancellations too, yippiee! If only he had managed to send a postcard too ;)) (He tried!)

Email ThisBlogThis!Share to TwitterShare to FacebookShare to Pinterest
Labels: benin 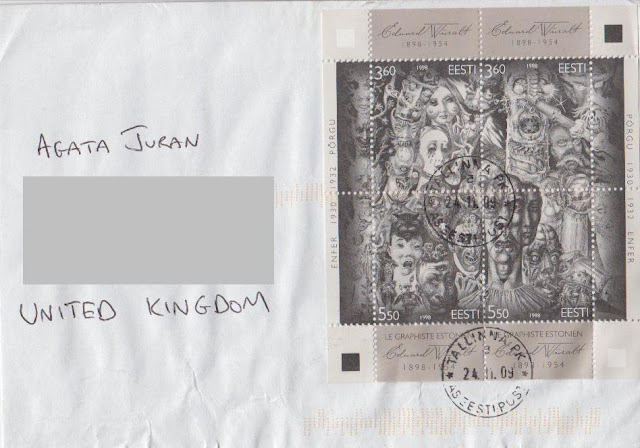 This was a surprise cover from Ashley from his trip to Estonia in 2009 :) A great set of stamps from 1998 celebrating a centennial of Eduard Wiiralt's birthday - he was a renowned Estonian artist, and this set shows a fragment of his graphics Põrgu (Hell) from 1930-32. Alas the envelope got damp on the way and I haven't managed to iron it out since..!

An Airmail cover from Honduras, received last week with a stamped card inside, as one w&s card sent before didn't reach me. Very nice gesture, and this way I get a cover too :)) With stamps from 2008 (Beijing Olympics) and 2009 (Juegos Tradicionales). Gracias Mervin :))) 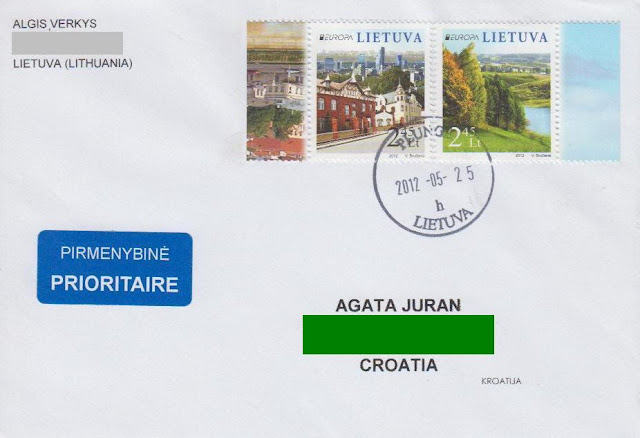 For this year's Europa issue Lithuania presented its town (architecture) and country. Couldn't find which exact spots they are! Thank you very much Algis :) 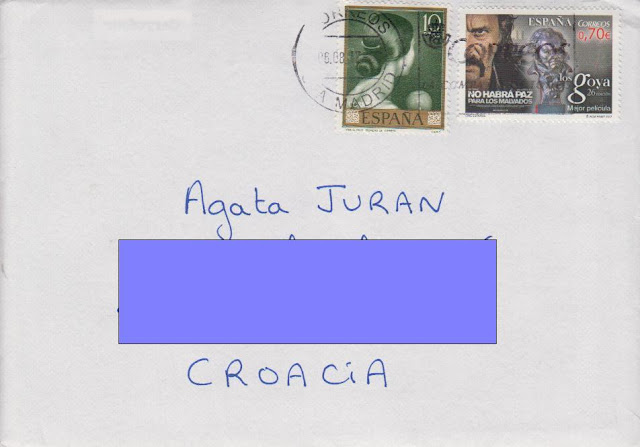 This cover displays one stamp from 1965 from a set of ten: Paintings by Julio Romero de Torres; and one new issue from 2012, cinema related: 26th annual los Premios Goya or Goya Film Awards, from a set of three. Thanks Fabienne :) 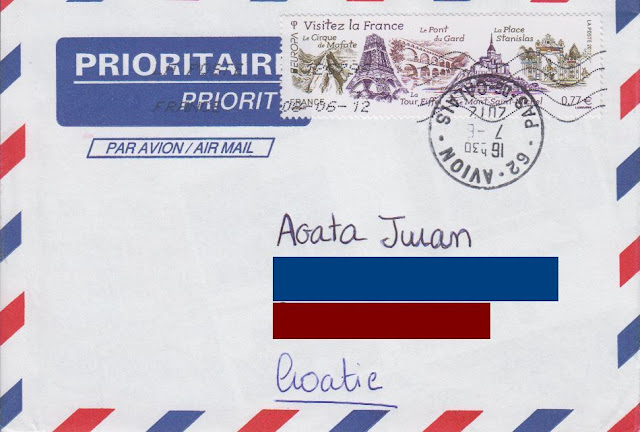 I love the loooong French stamps! As this year's Europa theme is 'Visit...' here you can see all the great sites in France - the Cirque de Mofate (Réunion), the Eiffel Tower, the Pont du Gard aqueduct, the stunning Mont Saint-Michel and the Place Stanislas in Nancy. As it happens, all are Unesco sites :)
Thank you goes to Stephanie and Arnaud, as both sent me a cover. 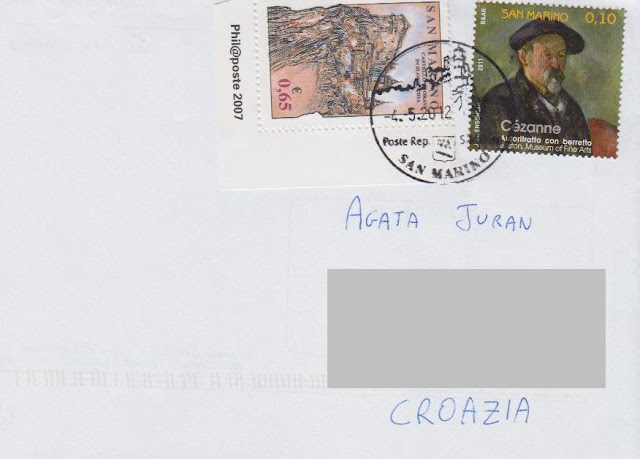 Very happy to have a cover from San Marino in my humble collection! The 1st stamp is from a joint issue with Slovakia from 2007, showing the 13th-cent. Orava Castle in north-western Slovakia. The 2nd was issued in 2001 and is from a set of 5 showing French painters - this is Post-Impressionist Paul Cézanne.
Another great addition from Luca, thanks so much! The cancellation is also gorgeous :)) 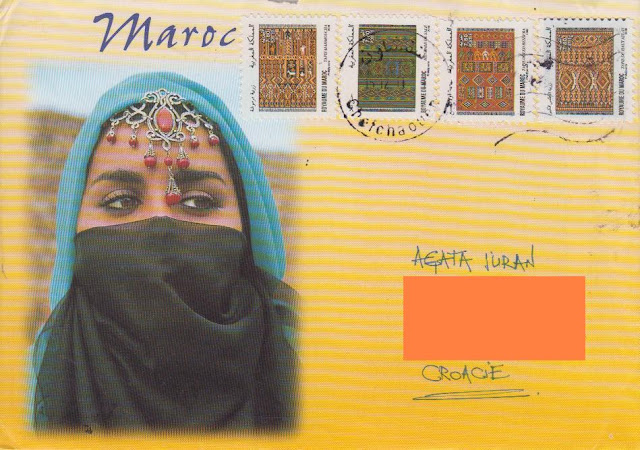 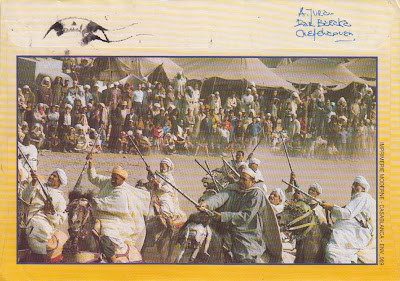 Whilst in Morocco I've sent myself (sure I do that!) this cover with a set of self-adhesive stamps issued in 2008, showing carpet designs from different regions - they are 4 out of 10, the rest I've used to send postcards :) The envelope was a lucky find in one of the souvenir shops. I must admit that Morocco is prime class when it comes to the variety of postcards!