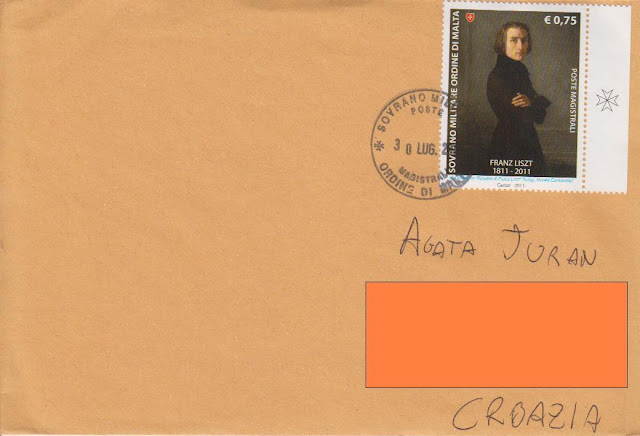 With the full name: The Sovereign Military Hospitaller Order of Saint John of Jerusalem of Rhodes and of Malta or Sovrano Militare Ordine Ospedaliero di San Giovanni di Gerusalemme di Rodi e di Malta in Italian, where the cover has been sent from :) It is the world's oldest surviving order of chivalry, is headquartered in Rome and widely considered a sovereign subject of international law.
Today the order has about 13,000 members; 80,000 permanent volunteers and 20,000 medical personnel including doctors, nurses, auxiliaries and paramedics in more than 120 countries. The goal is to assist the elderly, handicapped, refugeed, children, homeless, those with terminal illness and leprosy in five continents of the world, without distinction of race or religion. Through its worldwide relief corps - Malteser International - the Order is also engaged to aid victims of natural disasters, epidemics and armed conflicts.

My first thought is: the world needs more such orders! I will admit my ignorance, I wasn't aware of its sovereignity esp in postal terms. The funny thing is, it was mentioned to me one day on the forum - and the very next day i've received this FANTASTIC surprise from Luca! The curious coincidences of life eh? :))) The stamp is issued in 2011 and celebrates 200th birthday of this great composer and pianist. Thanks so much Luca!