At first this week's Sunday Stamps theme sounded tough...but in fact there are so many celebrations throughout April (or any other month!) its just that we are not aware of most of them..! I am now very thankful for the theme because I have already learnt a lot from other participants' posts :) However, I have been aware of Earth Day (April 22) since primary school, as our biology teacher was very keen to teach her pupils to treat Mother Earth kindly and thoughtfully. To celebrate this day, Croatian Mail has issued a lovely wolf stamp in 1994. 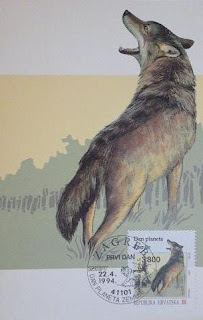 The back of the maxi card explains: The wolf (Canis Lupus) is a symbol of human's mindless destruction and negative influence upon nature. At this moment there are only 50 representatives of this species in Croatia, which points out the urgent necessity to protect them.

According to wikipedia, in the meantime this number has approximately quadrupled! I have never seen a wolf in my country, but then again I never ventured to their habitat...If you wonder about the postage, no its not 3800 kunas - back in those days we used trasition money called Croatian Dinar :) 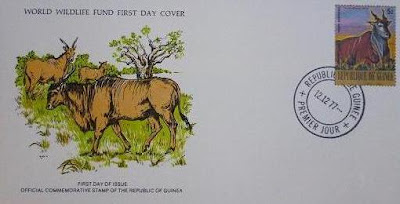 And how does this FDC relate to April? Its a World Wildlife Fund (WWF) cover - I believe this international non-governmental organisation is well- known to all nature lovers out there :) Its the world's largest independent conservation organization with over 5 million supporters worldwide, working in more than 100 countries, supporting around 1300 conservation and environmental projects. The official date of its fundation (or we could say its birthday) is April 29, 1961. The cover shows eland antelope (Taurotragus Oryx), a savannah and plains antelope found in East and Southern Africa. As I am not yet a full-blooded cover collector, when I buy FDC i mainly look for the year 1977 (you may guess - the year of my birth) and preferably december. And then again preferably animals :) 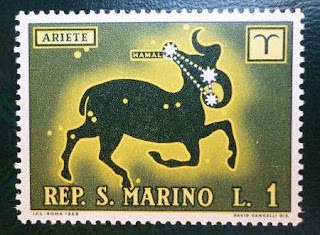 And what would be the most numerable celebration (in April)? Birthdays! April (until the 20th) is the month of Aries, first of the twelve zodiac signs who is adventurous, energetic and quick-witted. It relates to the (relatively small) constellation in the Northern Hemisphere with brightest star Alpha Ari. I have found this singular stamp in my random philatelic collection...The set was issued in 1970. I love Zodiac stamps, i wish I had more!

And now you can click here and learn many new things about April celebrations..!