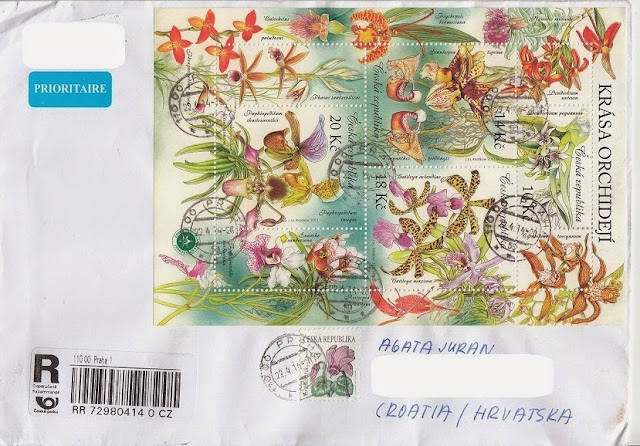 Now I have posted this some days ago, but today's theme for Sunday Stamps is flowers and I have no other cover to show here on this topic...and quite honestly, I think this one deserves some more attention ;)
This souvenir sheet on orchids was issued in 2012, when the Czech Orchid Society ("Ceská orchidejárská spolecnost") celebrated its 125. anniversary. Altogether 18 species are shown, but let me point out the four that adorn the actual stamps:
*10 Kc a Dendrobium peguanum is shown which can be found in Nepal, India and Myanmar. She was named after the town Pegu in Myanmar.
*14 Kc you can see a Coryanthes feildingii, whose biotopes are the wet forests from Mexico to Brazil.
*18 Kc two different orchids are shown. On the one hand there is a Cattleya aclandiae which can be found only in Brazil, the other a Cattleya maxima with her large blossoms (maxima) whose biotopes are in Columbia, Ecuador, Brazil and Amazonia.
*20 Kc we even see three species of Paphiopedilum - the Paphiopedilum charlesworthii from Myanmar, Thailand and SW-China; the very hirsute or scrubby (hirsutissimum) looking Paphiopedilum hirsutissimum grows in NE-India and Myanmar. The glorious (insigne) Paphiopedilum insigne is native in NE-India.
Now let me enlarge for a better view: 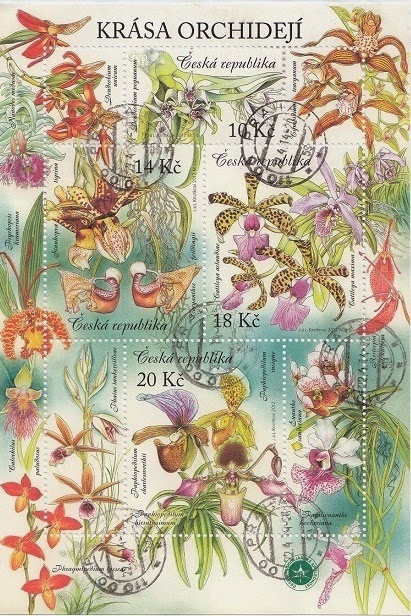